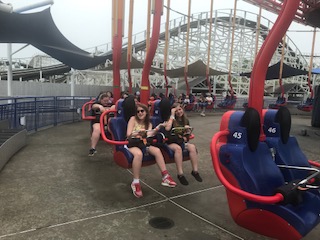 We just came back from a short but very sweet vacation. We spent Sunday through yesterday in Ohio. Sunday we went to the Dayton Air Show in Dayton, Ohio with my father, brother and my nephews. My daddy loves airplanes and when I hit my teen years he became a pilot and we went to a lot of air shows. Going to Dayton with my family was something I had wanted to do because it was something I enjoyed doing with my dad. I like airplanes too and was excited to be around them again.

The Dayton Air Show is much busier than I remember and it took us a long time to get parked and shuttled over to the airfield. We only were there for maybe 3 hours by the time we got settled in. My girls did not enjoy it mainly because of the line to get there and back to the car. I was happy once I was sitting in the field watching the Thunderbirds loop through the sky. My 4 year old son had his cousins and lots of bouncy houses and planes to explore so he was happy.

We then drove to Great Wolf Lodge in Mason Ohio where we spent the rest of our vacation. It is probably one of our favorite places to go and we’ve been there a handful of times. It’s walking distance from Kings Island, has a great staff, clean rooms and lots of things for the kids to do. My children have all enjoyed swimming in their waterpark and playing magic quest until bed time. This time we got park tickets for Kings Island so we spent our days there.

Being at the park was a little bitter sweet for me. Five months after my back surgery we went to Disneyworld and my doctor had told me at that time I could ride anything but I may not tolerate everything, meaning a ride wouldn’t damage my back but might make me sore. I had aggravated my back a few weeks ago so I didn’t want to ride anything that might aggravate it further so I had to pass on many of the rides I love. That meant my husband who isn’t as fearless as me when it comes to roller coasters had to ride them with my older daughters. They all did really well. My daughters’ rode almost everything that did not go upside down and they all had a wonderful time together. I took my son to the Snoopy land and watched him run from one ride to the next. We had a good lesson in waiting in lines the second day as it was much more crowded.

It was tiring for me as there was a lot of walking involved. However I reached my personal best since the surgery walking 6.5 miles on Tuesday. I was hurting by the end  but very relieved as I will be at Camp Allendale next week and walking over 3 miles a day. It was God’s way of letting me know that I could do this and the fears I had of walking too far and getting stuck somewhere melted away.

I also stood a great deal the trip too, something else I have a hard time with. Being able to stand in those lines for 30 to 40 minutes improved my confidence as well. I think back to right after my surgery when I wondered if I would ever be able to walk again and I am so thankful that God is healing me, even if it feels like such a slow process at times.

I was thankful for the time my family had together it was a very joyful trip for all of us.